These last weeks have been pretty hectic.

I am not good at pitching anything, or at verbal communication in general. Well, there are a few exceptions : I can put some acceptable performance when I improvise an executioner, a vigilante, an accountant, but that's about it. This was already bad when I had to pass oral exams, but for pitching a game, it gets even worse. Long story short, when I pitched the game for an accelerator in Paris, the project manager was not very impressed, and doubted there could be any market for a mix between XCOM and fantasy (come on!), and how going from ranged combat to melee and magic had some gameplay implications. The other argument given was that if the idea was any good, other would already have implemented it (which they did anyway, as Double Fine got Massive Chalice out a few months before). So it did not go too well...

Fast forward 2 weeks later, I learned of Stugan, which is some kind of secret facility in Sweden where game developer are confined for 2 month, and meet some mentors while working on their project. I thought it would be a good occasion to get some momentum and coverage for the game, so I applied, only to discover that the deadline was set for the day after. That or it is the cover story for some secret weapon system, that could give us the upper hand against Skynet in the future. Either way, it works for me, so I tried to get a good video pitch, and capture some game footage.

Capturing the game footage was not a big problem, even though I wish I had finished the UI before. But the video pitch was quite another beast: On top of being underwhelming at verbal communication, my English pronunciation is horrible. For commenting the gameplay sequences, it could do, as I could record very short 10s extracts, but that would not work when I was in front of the camera (well, I could have tried to synch recorded speech with my lips, but that would have been an even greater hassle). I heard that investors and editors mistrusted solo developers, so I ended up summoning this guy, who for some weird reason is better than me at delivering sentences in English. 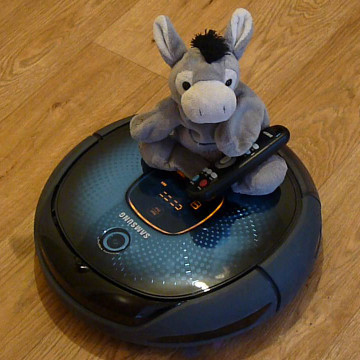 You can see the pitch there :

It is somewhat silly, but don't worry, the silliness and small grey donkey won't make it into the game, as it would not fit the setting too well.

If your browser cannot play this video, you can watch it there.

Given that it took me many iterations to get the general idea of the script, and my guardian donkey only got there around eleven PM (so a few hours before the deadline), things ended up being a little hectic. This determined me not to use youtube to upload the video, but go with Wistia instead, so that I could update it after I sent the link (the application needed to provide a link to a video, but it was ok to modify it afterwards). This allowed me to rework some small sequences the day after, and add the small explosion effects you can see. The other good thing with Wistia is that it does not try to convince your audience that they should be watching your competitor's video after watching yours. I could also have done it with vimeo, but I didn't have enough time to determine which pricing option would be the best suited to me, and they have quite a bad history when it comes to video game footage, even though they eventually dropped this archaic restriction.